It’s been a week to the day…

Jason hadn’t been feeling 100% the past few months but he chalked it up to just being tired, not sleeping well, needing to lose a few pounds and stress.

But the last month or so he started losing weight (like sometimes 2 pounds a day) without really trying.  Food wasn’t tasting good, he was getting up a lot in the middle of the night to go to the bathroom and was feeling thirsty.  I knew something was wrong. But just wasn’t sure exactly what.

Then came the turning point.

One week ago today, I was finishing up my morning workout and heard Jason get up and head to the kitchen.  Not long after, I heard him throwing up in the bathroom…like it was loud.  Sounded horrendous. When he got out of the bathroom, he said he felt a lot better. (I didn’t want to ask if he was ok WHILE in there because obviously he wouldn’t be able to answer) He attributed it to acid reflux…which he does get on occasion, and the things he’d eaten the day before not sitting well in his stomach.  We’d spend the last few days trying to find things he could eat and drink to keep him hydrated. (More on that on another day another post)

So at that point, I said if it happens again (meaning if he throws up again), I would be taking him to the ER. Mind you we had been to the minute clinic the previous Sunday who couldn’t really run any tests or anything and told us to wait to see his primary care for the appt I had made for him on Thursday. Honestly, I felt like something was wrong and I didn’t want to wait so I found an earlier appt for him on Tuesday (which the Dr office cancelled that morning because the Dr was sick) so then I found him a tele-health visit with a nurse practitioner Tuesday afternoon who then set up lab work for Thursday morning.  It was quite the cluster!

Anyway back to that morning a week ago…he enjoyed the steel cuts oats I made him until those came up a few hours later. That was it for me…we were going to the ER whether he liked it or not.  He was dreading the likely 6 hour wait in the ER and and had reluctantly agreed to go. #stubborn  I was most concerned about dehydration and what that could do to his body. It wasn’t until he threw up a 3rd time that he was fully on board with going.

Somewhere in my heart (coupled with the Google searches I’d done a night or two prior) I knew what was happening. I didn’t realize how serious it was though until he finally got into an ICU bed in the ER after a 5 hour wait…by himself. Due to Covid restrictions there were no visitors allowed in the waiting room so I waited in the parking lot.  We later learned he was a high priority case but they had to wait for a bed to open up that had the medical equipment they needed to treat him. Had there been an ICU bed open in the hospital he would have gone there. 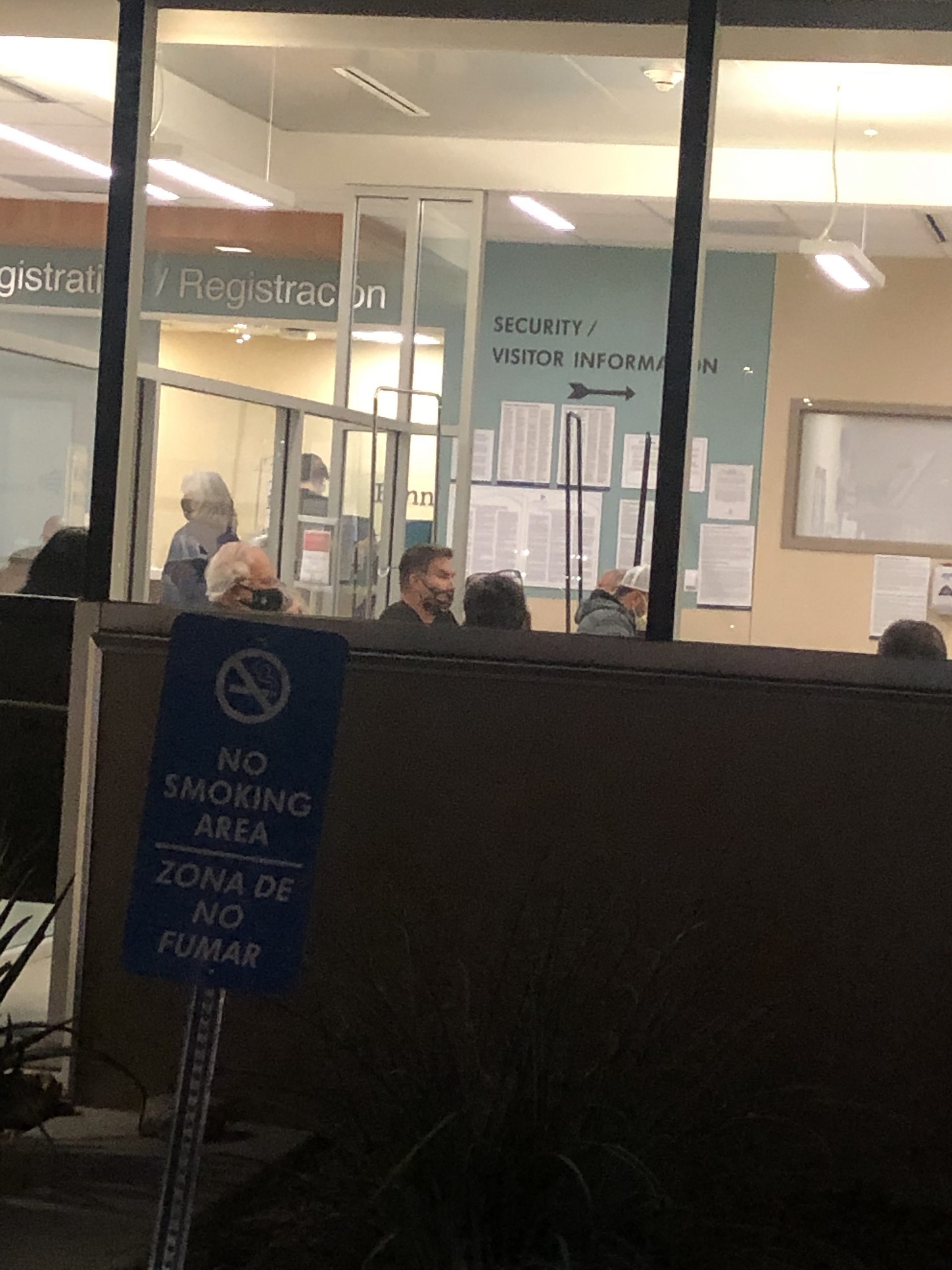 The diagnosis…Jason was in Diabetic Ketoacidosis. Only thing…he’s never been diagnosed with Diabetes before…until now.

He was in the hospital for 3 nights and got to come home Saturday night. 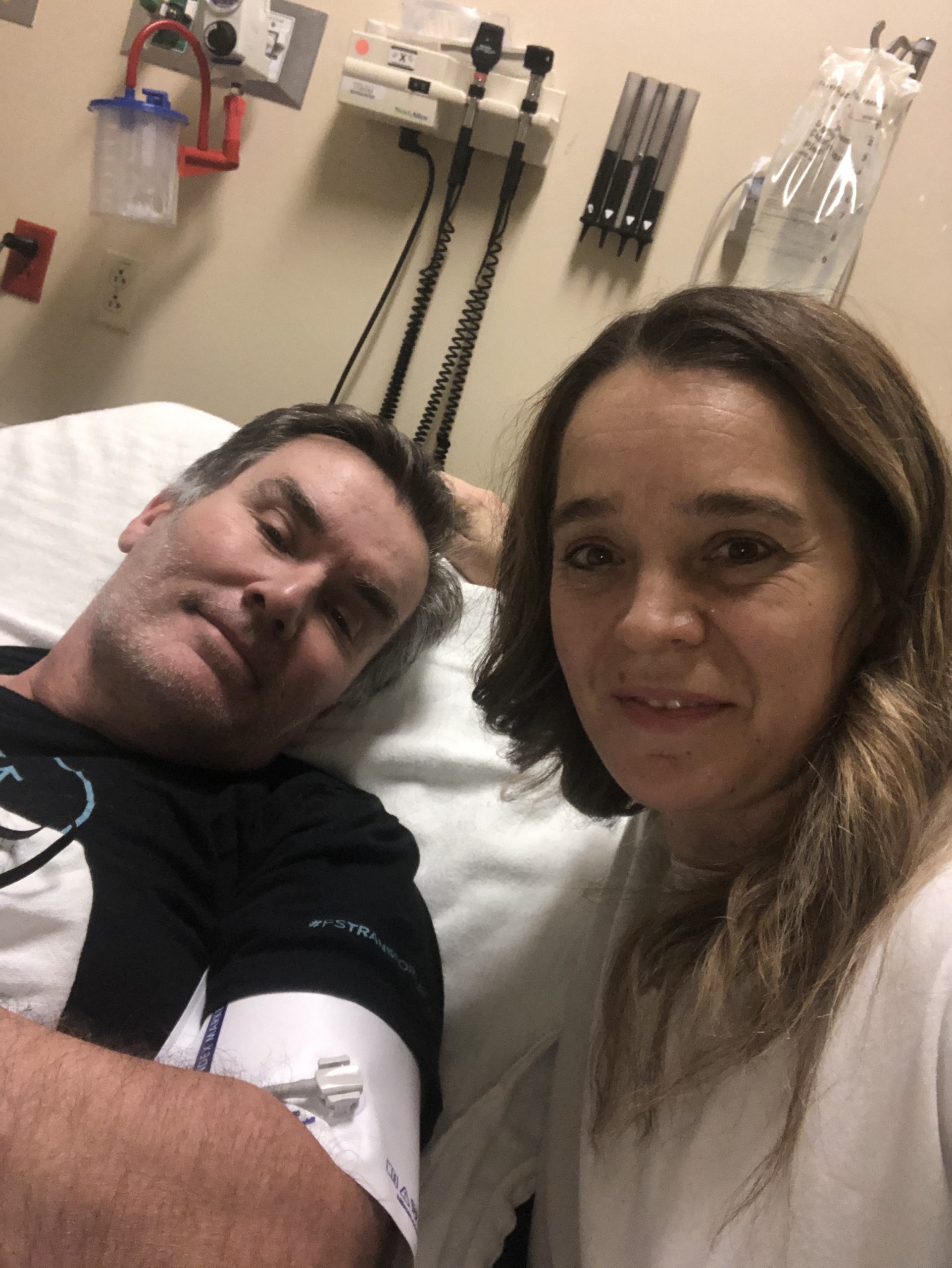 The first night in the ER. 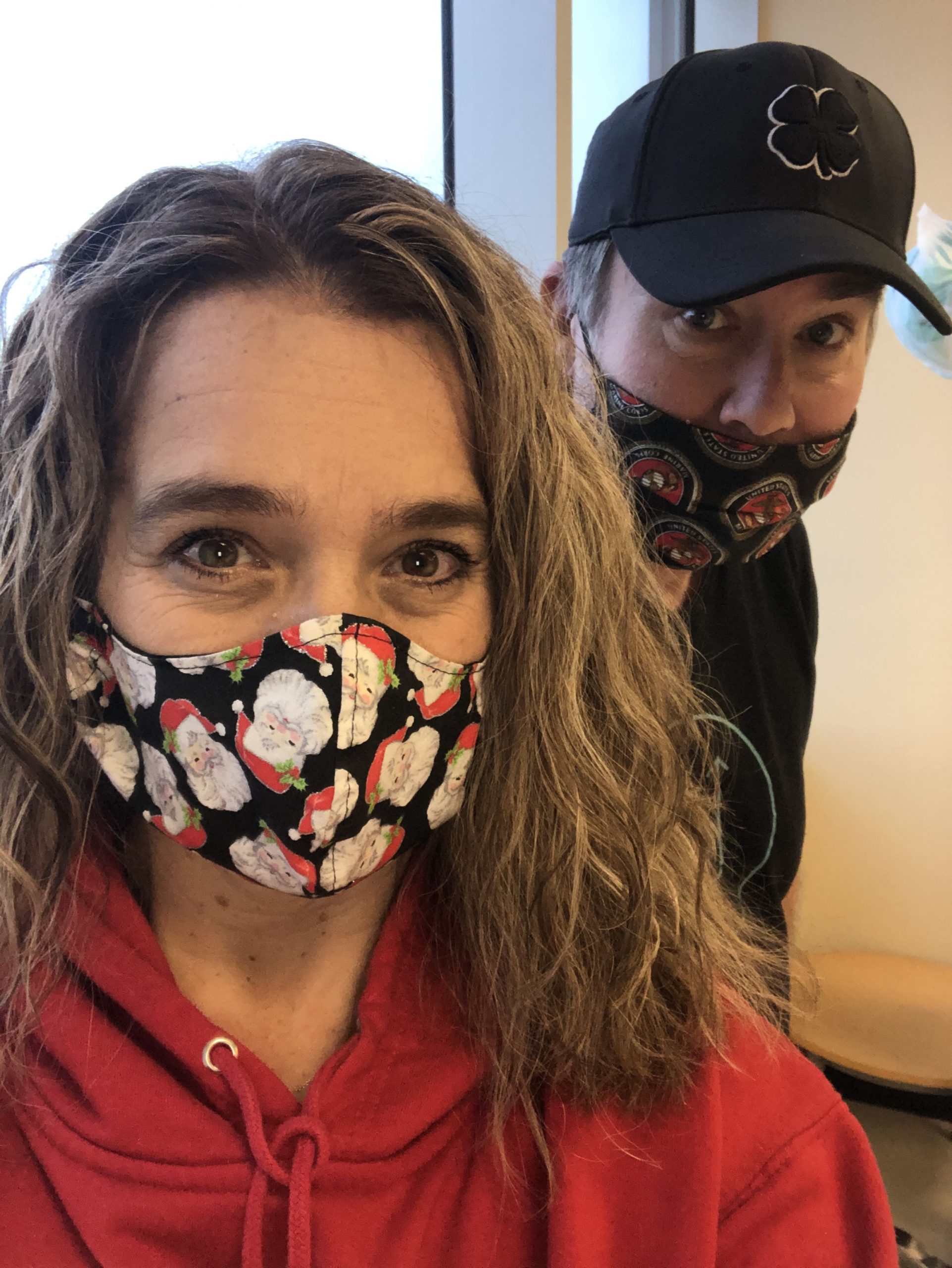 Friday afternoon visit. Taking him for walks around the hospital 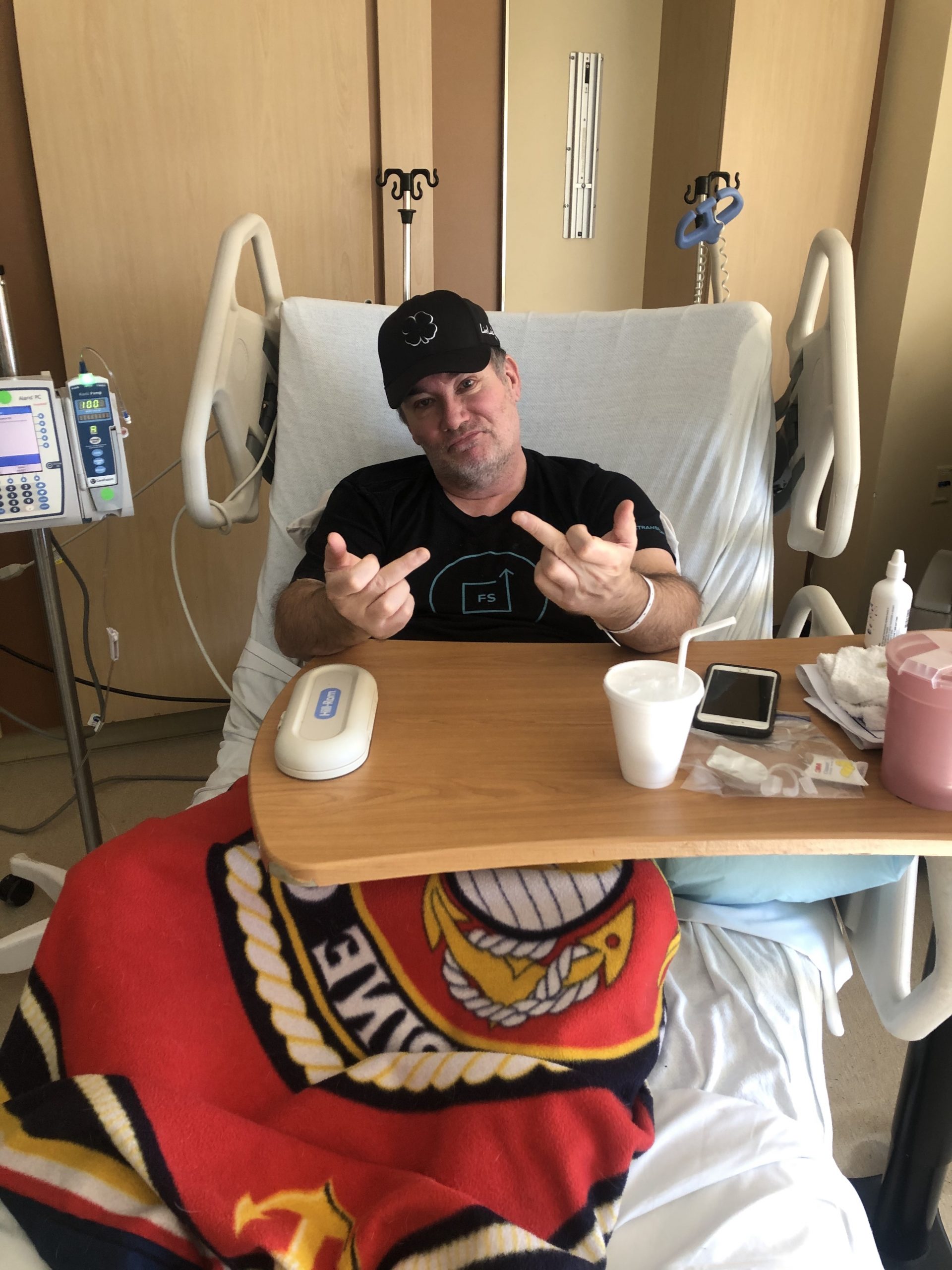 He was definitely ready to come home! 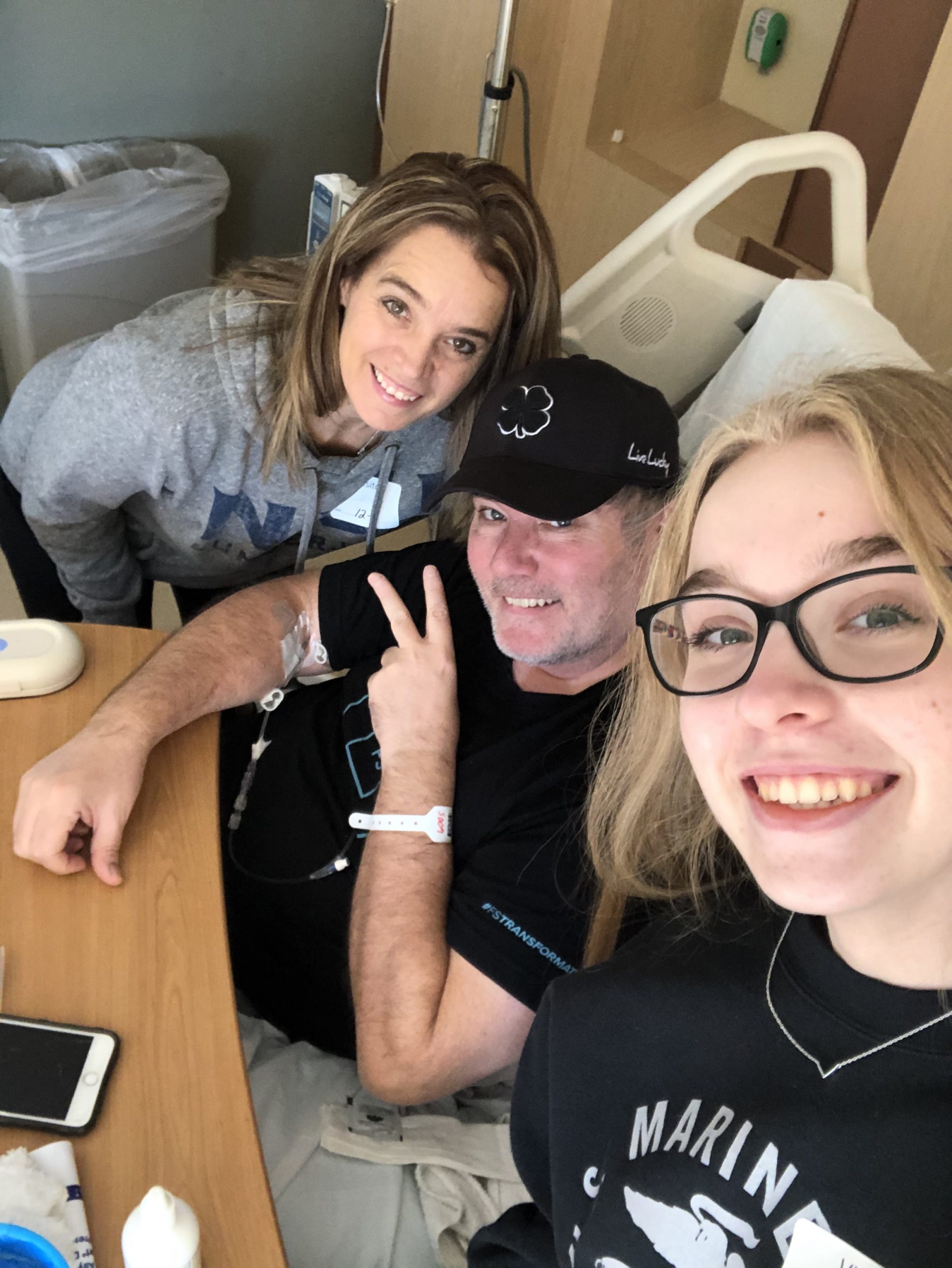 Kendall came with me on Saturday after we picked up our 5K race packets!

It’s been a crazy week but I’m so grateful that this is a condition that is completely manageable. Believe me, there were so many scenarios playing out in my head as to what could be wrong with him. Thankfully, Type 2 is something that can be managed with something I’m very well versed in…eating healthy and exercise.

We now start our journey to help him get his numbers down and diaBEAT this!  (Shay…that’s for you)

I’m super grateful he is completely on board with doing whatever it takes to get off the medication as quickly as possible. As stubborn as he is and as much as he doesn’t like to workout and eat right, he’s committed! Sometimes in life, God gives us these little wake up calls.  Reminds us that we need to be getting our yearly physicals; that we need to be taking better care of our bodies…eating more healthy food and less processed crap and getting in some daily exercise.  A few of the things that he hadn’t been doing consistently for awhile.

And for me…I guess it gives me a greater purpose.  I’ll be honest in saying that I was beginning to think that my time in the health and fitness was up..I mean its been over 10 years. But God seems to have other plans! I’ll be here to help him on along his journey to reverse his T2 diabetes and continuing my journey to help others not end up in this situation!

Having said that…over the last year or so, I’ve been working on an ebook about healthy eating. I had gotten down to the final stages of editing and considered scratching the whole thing a couple months ago. But after this past week, I decided it was time for me to finish it! So that’s what I did. I feel like more people need to know about what it means to eat healthy and avoid a trip to the ER!

Find out more about my Ultimate Guide to Healthy Eating HERE! 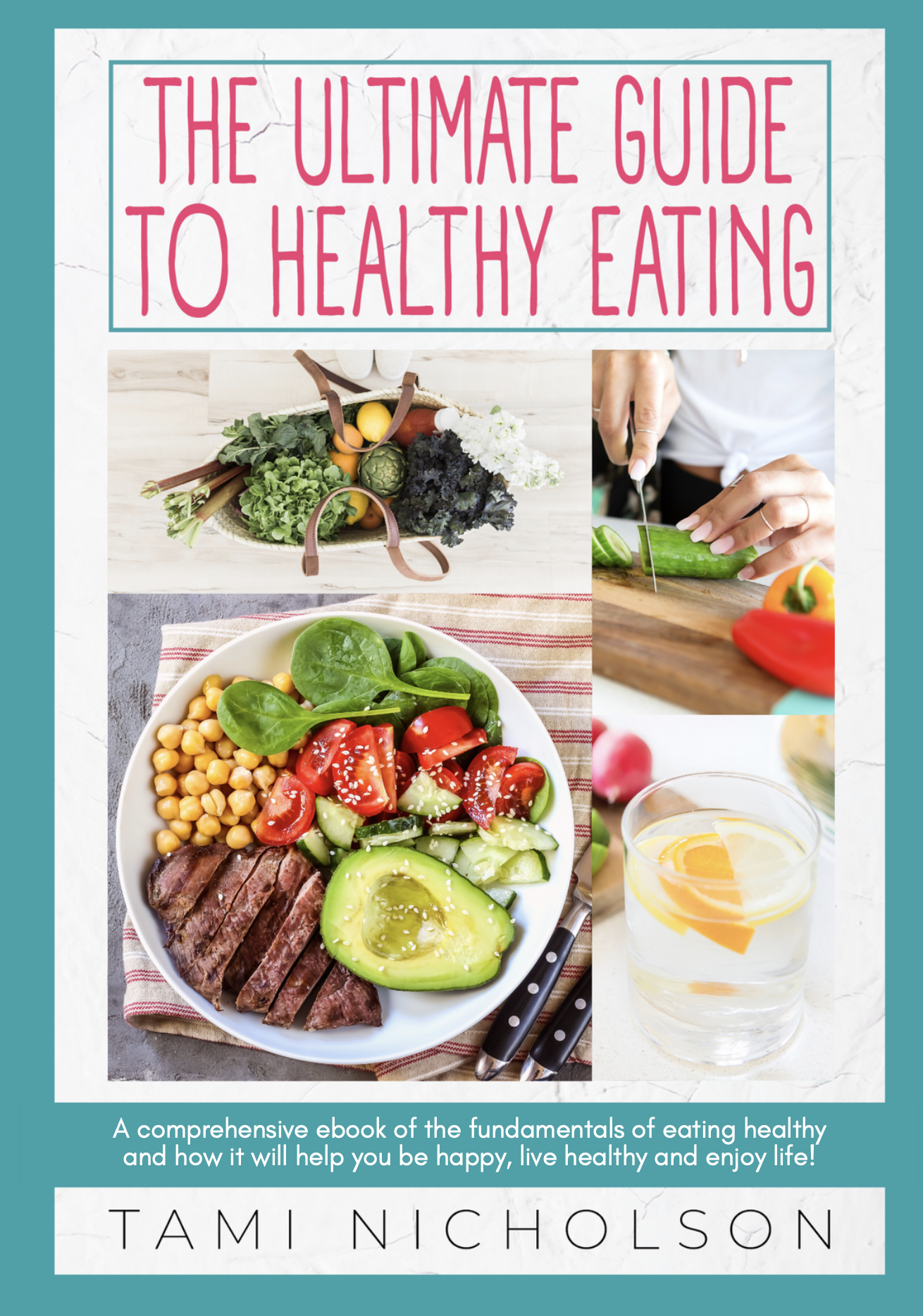 Will be sharing updates about this journey here on the blog!

Are you looking to build an online business? Check out Groove! 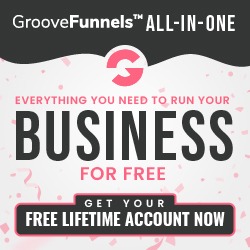